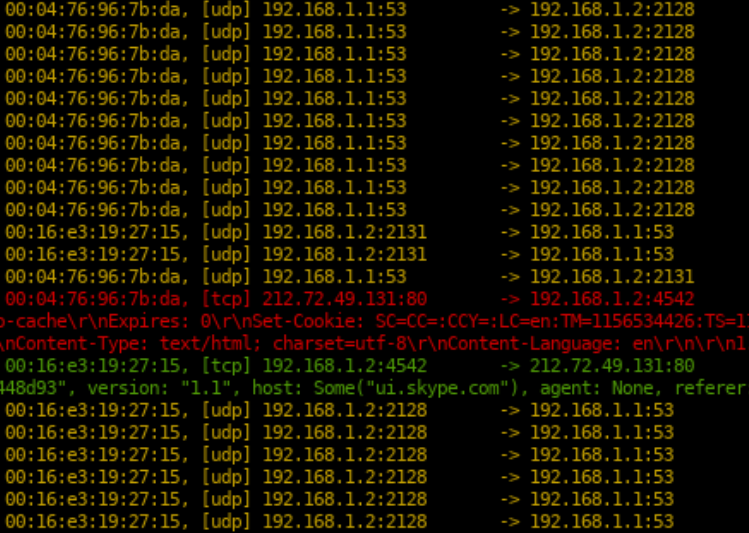 sniffglue is a network sniffer written in rust. Network packets are parsed concurrently using a thread pool to utilize all cpu cores. Project goals are that you can run sniffglue securely on untrusted networks and that it must not crash when processing packets. The output should be as useful as possible by default.

There are prebuilt packages signed by a debian maintainer. We can import the key for this repository out of the debian keyring.

To build from source make sure you have libpcap and libseccomp installed. On debian based systems:

Or you can build a Debian package via cargo-deb:

You can build sniffglue as a docker image to debug container setups. The image is currently about 11.1MB. It is recommended to push it to your own registry.

To report a security issue please contact kpcyrd on ircs://irc.hackint.org.

To ensure a compromised process doesn’t compromise the system, sniffglue uses seccomp to restrict the syscalls that can be used after the process started. This is done in two stages, first at the very beginning (directly after env_logger initialized) and once after the sniffer has been setup, but before packets are read from the network.

During the second stage, there’s also some general hardening that is applied before all unneeded syscalls are finally disabled. Those are system specific, so a configuration file is read from /etc/sniffglue.conf. This config file specifies an empty directory for chroot and an unprivileged account in user that is used to drop root privileges.

This project includes a small boxxy-rs based shell that can be used to explore the sandbox at various stages during and after initialization. This is also used by travis to ensure the sandbox actually blocks syscalls.

This project is tested using reprotest. Currently the following variations are excluded:

The packet processing of sniffglue can be fuzzed using cargo-fuzz. Everything you should need is provided in the fuzz/ directory that is distributed along with its source code. Please note that this program links to libpcap which is not included in the current fuzzing configuration.